My husband Duckie finally decided on a new costume for one of the two dress-up nights we're attending this weekend. Roughly five hours ago he told me "I want to be Leslie Vernon*!"

I still have some work to do on the mask, but here's the post-paint stage on a quickie plaster form. 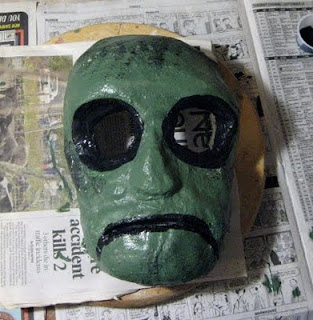 For those who aren't up to speed with popular independent horror flicks, Leslie Vernon is the psycho character in Behind The Mask: The Rise of Leslie Vernon. We strongly reccommend this film to anyone who loves 1980s slashers!