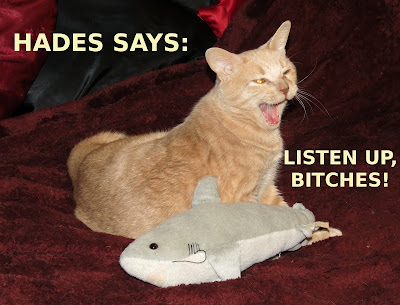 After several years of being my official "spokescat" and making all the important announcements for me on Facebook, Hades finally has his very own page.

It all started when I noticed that any photos I posted of my cat Hades got 65% more likes and responses than anything else I put up on my virtual wall.  Then Hades explained to me that cats rule the internet. Period.

You would think that Hatchet would want to be my spokescat, but she's still very camera-shy. It's hard enough to get her to take that one photograph a year with Hammy for Shark Week.

Hades, on the other hand, has plenty to say and loves the camera. People started responding to him so much that he demanded to have a real "voice" in Facebook and his own page where he can talk about whatever he wants to.

I told him that if he gets 500 likes then I'll give him a double helping of Muenster "cheese mousies".