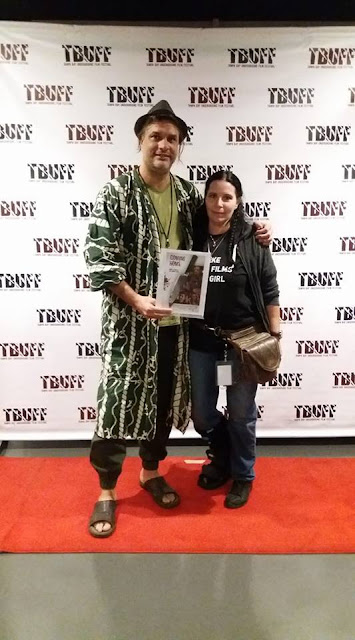 Duckie and I got back from the Tampa Bay Underground Film Festival after spending three days mingling with other film-makers, watching films, and going to after-event parties. 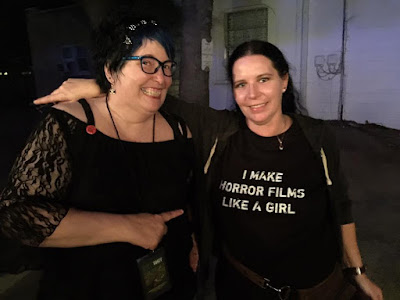 I also ran into Lynne Hansen, who inspired me to make my t-shirt after seeing her "I Make Films Like A Girl" buttons at WIHFF this past summer.

Now I am going to go into a little bit of a rant here, but I want to make it very clear that this in no way should be seen as being against TBUFF or its organizers...

I was very thrilled that "The Family Way: Coming Home" was not only accepted into TBUFF, but also nominated for awards in three categories.  Those nominations meant that the judges felt the film was good enough in a few aspects to be put up against some film-makers that I know to be astonishingly good.

I don't usually get a lot of love from film festivals in my home state of Florida. If I don't get outright rejected, I get tossed into terrible time slots that guarantee the least amount of audience members... like before 10am or after midnight.  My promotional materials are never displayed and my films aren't mentioned in the festival promotions, even when it's a premiere.  I have no idea why I'm marginalized like this, but I am.

Last year I had my short film "The Figure" at TBUFF, and while I was completely unknown to the organizers (as far as I know), they did treat me fairly.  My film had a lot of blood in it, so it wasn't an insult to be put in a late night block with other gory horror films. I was just happy to be there.

This year I knew I wanted to do TBUFF again. I'm glad I did, because I really felt  that they went above and beyond to promote the film-makers. I imagine that having those nominations is what put "Coming Home" into the promotional video shown on opening night, but I noticed that they were displaying the posters for prety much any film that sent them promotional materials on the days the films were being shown.

The organizers, volunteers, and even founding members were friendly as usual, and I'm glad I had much more time this year to chat with them. They don't have a ton of money to work with, but they did a really good job with the opening night party and after-awards party. It may not be the biggest festival in the state, but it's nothing to sneeze at either.

There was only one big thing that really bothered me about the festival, and it has absolutely nothing whatsoever to do with how it's run or the people who are running it.

It was the behavior of many of the attending film-makers.

I might have gotten really spoiled by the out-of-state festivals I've attended both as a film-maker and a fan of movies. I've only seen this sort of behavior on a large scale in Florida events.

At the beginning of a block of movies there is a much, much larger head count in the audience then there is when the last film of the block plays.  The film-makers tend to go to their block with their friends and then leave as soon as their own film has shown.  So much for the idea that a festival is a great way to see other people's work and network.  How do you know that the bloke you're talking to in the hallway is a great cinematographer if you walked out before his film started?

As a director of a film that was shown in a late night horror block, I'd like to thank the 6 people who stayed long enough to see my 16-minute movie.  However, I do have to wonder how many would have been there had mine been the last film on the block.

Then almost as an insult, a lot of those film-makers returned as the end credits of the last film rolled so they could participate in the Q&A session at the end. (Another big THANK YOU going out to the TBUFF host for asking me to talk about my film being a proof-of-concept for a feature.)

It gets worse... the exact same behavior was on display during the awards ceremony.  People stayed long enough to find out if they won in categories they were nominated for, then they couldn't leave fast enough.  I was sitting against the back wall by the door and knew to pull my legs in after each award was handed out because a crowd of people would be leaving the room.

I saw a lot of really good films that played on Thursday and Friday. I regret that I didn't see any on Saturday because I was dealing with a mild case of food poisoning that day (late night diner on Friday did me in there.) I was pleased to meet some of the people who made the films that I enjoyed... in the lobby between blocks or at the parties that were organized for socializing.

This might be more common than I know, but it still bothers me. Especially since so far I've only seen it at pretty much every festival I've attended in Florida.