I have papers now.

This came in for me today from the AAB Film Festival. 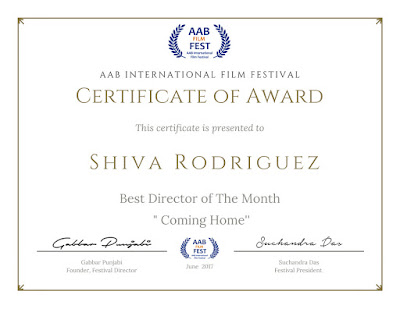 It's the first time I've ever been singled out for accolades as a director.

I'm getting used to seeing laurels come in for the films that I've directed, but that's the project entire being recognized as a collaborative medium with a lot of really talented people working on it to earn those ribbons. I don't even like calling them "my films" because of that, but it's usually my name listed next to the title.

So even though this particular festival singled me out for an
award, I still say that it wasn't all me. A lot of people worked on "Coming Home" to make it look good, and this director's award is actually a lot of praise heaped on to the cast that I gave the direction to. If they couldn't pull off great performances, this paper would have never been sent to me.