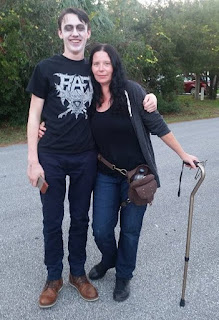 Out of all the pictures taken on set during the film shoot this week, this one is my favourite.

Over a decade ago I developed the characters for a story called The Family Way, which was my first purely fictional feature-length screenplay. The story was inspired by my wondering how crazy people who are obviously not related get together to form “families” in horror movies.

The first draft opened by introducing “Crawford”, a teen-aged sociopath who was discovering his murderous tendencies and was about to get caught for his youthful, sloppy mistakes. Crawford soon became one of my favorite characters to develop, although those first scenes of his were eventually cut from the final draft of the script. At the time I never thought I would actually get to see this character come to life on a screen.

This year we decided that instead of filming a trailer to use as a visual while we pitched The Family Way to potential investors, we'd take those lost scenes and turn them into a short film. So we shot “The Family Way: Coming Home” this week.

The young man with me in this picture is very special to me. I met Nick Trivisonno when he was 14 years old when he auditioned for his first film role in the project that was also my first time directing. Although he was too old for the role he wanted, I made sure to cast him as an extra and over the past four years I've been both a friend and mentor to him. He's very serious about chasing a career in acting, probably the most dedicated person I've ever known at his age.

This photo was taken during the second day of filming. Almost four years after this ambitious newbie teenaged actor came in to audition for a reluctant newbie director, he's my Crawford as I sit in the director's chair for the prequel to The Family Way.