We started shooting principle photography on Predatory Moon on Thursday, which just happened to be both the night of a full moon and a lunar eclipse. Coincidence? (The crew keeps telling me that I should say we planned that!)

So I've been directing for the past four days now, and I do have to admit that I've been enjoying it. It's a strange position for me though. I've had so many years of training myself to move like a ninja whenever I hear "quiet on the set!" that there were a few occasions when I forgot that I'm the one who was supposed to yell "Action!" this week.

The energy on the set is amazing, so I'm pleased to tell you that I have indeed tested all my theories about what directors can do to improve the conditions on their sets and put together a good working team. (Nice to know I haven't just been blogging out of my arse for the past few years, eh?) I'm not about to say that everything runs perfectly... let's face it, this is a micro-budget creature feature that is being held together with duct tape and a prayer to the Film Gods, but at least the food is good and the energy is, well, very energizing!

We did have a near-fatal blow about 48 hours before filming was scheduled to begin when one of my lead actors had to suddenly drop out. It wasn't his fault and I certainly understood the circumstances so there is zero bitterness there. Fortunately, my husband Duckie volunteered to jump into the role and after a mad dash to get a very specific costume made for him, we were good to go by 9:00 AM on April 25th.

I know that sounds horrible. "Hey guys, we lost one of our leads, but don't worry... my husband can play the role!" What everyone found out quickly: Duckie is actually a veteran actor who has just been away from it for the past few years. He shook the dust off easily and made a very smooth transition from crew-to-cast...which I was entirely thankful for since the first day was shooting two sex scenes involving his character.

Please note: I would never recommend that anyone ever replace a lost character two days before shooting with one's Spouse or Significant Other unless that person does have a very solid acting background! I was REALLY REALLY lucky in that situation!

So far it has been the expected headaches involving equipment malfunctions and airplanes, and the very unexpected thrill of having a cast and crew that work so well together that you'd swear we'd all been working together for four years rather than just four days. We've been posting our antics on our Facebook page for Predatory Moon, as well as the website at www.predatorymoon.com 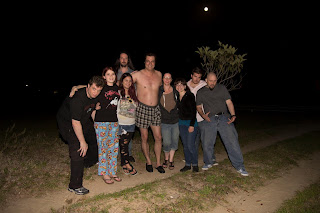 Cast and Ormond Beach Unit Crew on Day One under the full moon.