Came across this while looking for something completely different in my old files. This was a Freddy Krueger makeup that I did back when I was fifteen. It was for a high-school version of the Academy Awards and they wanted Freddy and Jason to present the award for "Friendliest".

I did the makeup from scratch using latex and tissue paper, and built the glove with tin foil and cardboard. (Fortunately, there were still many finger-less gloves to be found easily in the late 1980s!)

This photo also was published in the local newspaper, which was a really big deal for a kid like me (even though the paper didn't credit me as the makeup artist.) 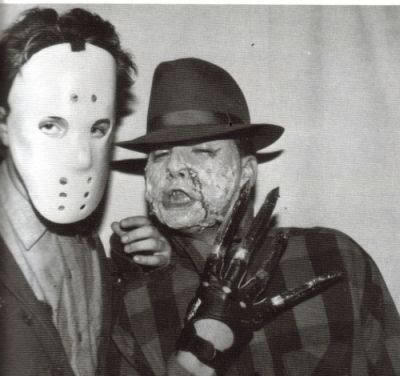 * At least, the first makeup job as in someone else asked me to do it. I could write for days about the various things I would torture school faculties with without being encouraged to do so.