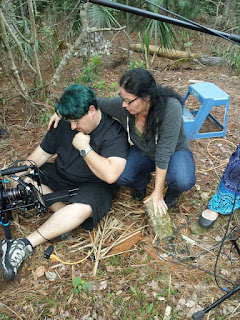 Years ago I did some FX work for director Scott Sullivan when he was first starting out. The second project I worked with him on, "Harbinger",  landed me my first award at a contest.

Since then, he's moved on to be awesome.  Seriously.  I've lost count of how many people I've heard gushing over his work both as a director and as a cinematographer.

"The Family Way: Coming Home" was sort of a test run to see how well we'd work together if I were the one in charge.

Of course, anyone who knows my directing style knows that I am not so ego-filled that I won't acknowledge that there are people who are better at their jobs than I am at their job, and that I have zero problem taking suggestions. (Hell, I've been known to grab the nearest PA for a second opinion on something on set.)

Working with Scott was like a dream.  I figured that my job as Director was to make sure that the actors knew what they were doing and that his job as Director of Photography was to make it all look pretty in-cam.  And that worked out beautifully for us.

I really can't wait to see the finished product. Just what I saw with the rushes was breath-taking.