I've been running into this a lot lately, so I figured it was high time that I wrote an essay about it. Mind you, I'm mostly speaking about low-budget independent films here, as the major studios will hire a small army for separate key makeup, special effects, wardrobe, and prop departments.

I am not a general all-around makeup artist. I'm actually the last person you want to hire to do your wedding makeup unless you've got a very unusual theme to the ceremony. In film, I'm not the best choice for doing "natural", "old age", or "ethnic" makeups on actors. That's a job for a skilled key makeup artist.

When talking to people, I always make it a point to say that while I do know my way around a standard makeup kit, I specialize in casualty and horror makeup. I'm an "FX makeup artist", meaning I can make and apply prosthetics, build up simulated injuries, create three-dimensional makeups, and things of that nature.

It's really not uncommon for people to believe that a makeup artist and an FX artist are one and the same. Unfortunately, even people in the field do this quite frequently and it sometimes leads to problems.

I'll admit, once upon a time I used to make the same mistake... right up until I started getting requests to do bridal and glamour makeups because it was assumed that I knew how to do those things. I did end up learning a bit about glamour makeup so I could do it in a pinch, but I would by no means consider myself a seasoned professional at it.

I've also seen a few makeup artists who claimed to also be FX artists. I'm not saying that someone can't be both, as most FX artists do have a background in makeup. However, in many cases they believe that all one needs to do for FX is splatter some stage blood and messy stuff around.

Yes, spraying blood around is often part of the job for an FX artist, but there is a little bit more to it than that. To do practical FX, one must be a bit of an illusionist. The job requires being able to trick viewers into believing something that isn't really happening. Sometimes gags need to be built in order to show the bullet hitting the body, not just the bloody hole it produces. Sometimes it needs to be raining or snowing outside despite the actual weather forecast. Sometimes someone needs to be on fire. Sometimes special prop weapons need to be fabricated. And sometimes a character does just need to bleed profusely.

When I'm afforded the luxury, I really enjoy being able to work with a makeup artist on a horror project. It allows me to put all my concentration on the effects themselves without having to worry about making up the actor. A makeup artist can "dirty down" a victim and get him into prosthetic pieces while I fabricate the weapon gags and blood rigs that will make it look like he's being hacked into bits on-camera.

The "Blood Drive" shoot for Predatory Moon was such a case. The wonderfully talented Dee Dee Seruga handled all the character makeups needed, such as the zombie, clown, vampire, etc... and then sent them out on set for me to kill off using the FX gags I built. I'm not ashamed at all to say that Dee Dee did a much better job on the character makeup than I would have, but I also know that she did not have the know-how to pull off the effects we did. I don't believe that we would have been able to do the entire project in under 14 hours (with six characters being killed horribly) if there wasn't a separation between makeup and FX and the end result was just beautiful. 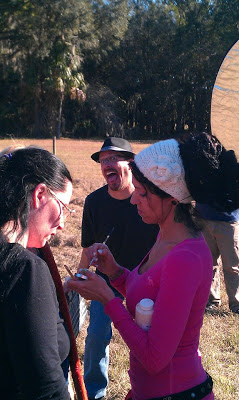 Dee Dee & I sharing responsibilities to create and destroy a zombie for the Blood Drive...while being photo-bombed by the UPM.

Earlier this year I saw a website blog from the director of a low-budget film where he viciously berated his makeup/FX artist online. After reading both side of the story (with the equally vicious response from the artist), I found that the fault was shared by both the director and the artist - for both believing that makeup and FX are the same thing. After reading paragraph after paragraph of venom-spewing, my only thought was how much aggravation could have been spared on both sides had someone just pointed this out in the beginning. The makeup artist in question seemed to have a decent portfolio (for makeup). He just didn't know how to execute FX and this greatly displeased the director who seemed to have expected the same quality in both jobs done by one person.